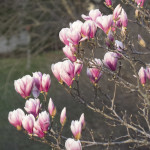 The Pennswood Village campus is in full bloom this spring. Browse these beautiful photos below by Yoma Ullman, photographer and resident.

END_OF_DOCUMENT_TOKEN_TO_BE_REPLACED

Pennswood Trips Committee Plans Many Opportunities for Entertainment and Travel

When Mike and Bobbi Posen moved to Pennswood Village a few years ago, they were quickly invited by their peers to become Chairs of the Trips Committee. The committee is a group of interested residents who brainstorm, organize, plan, and execute countless trips each year for the residents of Pennswood. Mike and Bobbi couldn’t say no to the offer, and as West Coast natives, joined the committee to learn more about the area.

“You might think that living in a senior living community is about retiring,” says Mike. “But we have been busier than ever planning and participating in some of the offerings that we have.” Bobbi adds, “Sometimes we have to intentionally schedule days to stay home!”

As Chairs, their role is to help plan and structure meetings with a group of about 12 fellow resident committee members. At the monthly meetings, they brainstorm places to visit, review suggestions submitted by other residents, and decide which places would make excellent trips.

Any Pennswood resident can suggest a trip to the committee, and many residents have personal ties to favorite destinations. For example, residents often visit the James. A. Michener Art Museum, which was co-founded by Herman Silverman, a current Pennswood resident. Another new resident and alum of the University of Pennsylvania recently organized a trip to the University of Pennsylvania Museum of Archaeology and Anthropology.