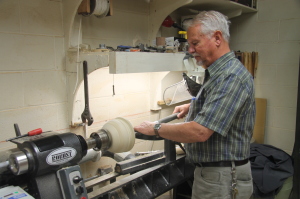 For Pennswood Village resident Fred Nielsen, trees have been a way of life for more than 40 years. A former tree farmer, he spent years growing and cutting trees in Mercer County, N.J., to be used to make fine furniture.

Fred decided to give up tree farming and slow down in 2013. That’s when he and his wife, Maiken, stumbled upon Pennswood Village and decided to make it their new home. “We found out about Pennswood by accident,” he said. “We took one look at the place and signed up. We instantly took a liking to it.”

They moved in that year, and Fred took it easy for a time, recovering from an illness. But he soon discovered that Pennswood Village has a woodshop available for residents. Now he can be found as many as six days a week in the woodshop repairing, restoring and refinishing furniture for other residents, and making things like bowls and other gifts out of turned wood. “I feel lucky. I got rid of my illness and I’m feeling good, so I go about six hours a day, four days a week, and then sometimes I go on Saturdays just for fun,” he said. 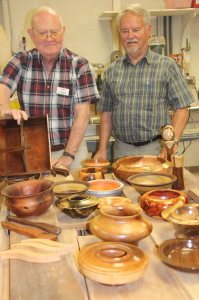 Along with other residents who are involved at the woodshop, Fred searches firewood piles and other places for wood that has unusual patterns. They use the wood to make things like pepper grinders, for example, that the group can sell to raise money to buy the things they need to continue their work like tools, equipment, lacquer and sandpaper. “It’s a good group of people down there. Some of them are in their eighties and they put in a few hours and then come back,” said Fred. “We’re going to make a display cabinet to put our items in. People like to buy things that are handmade.”

When Fred is in the woodshop, he’s on his feet standing in front of the lathe, a spinning tool, before he passes the wood to the next person to sand it and then it goes to the next person to stain it. “It becomes a community project when everyone gets to have a hand in it,” he said. “I could do it all but I don’t have to.”

Even though Fred acknowledges that if he hadn’t had Lyme disease, he and his wife probably wouldn’t have moved to Pennswood Village when they did, he says he’s living the retirement he envisioned and doing what he wants to do. Now that he’s feeling better, that means spending his time in the woodshop nearly every day, because otherwise, he says his wife would probably try to teach him how to knit. “When you retire, you should make it as nice as you can for the years you have left,” he said. “This is a nice place. We take walks all the time and it’s beautiful. The people are all nice and the food is very good. It’s the best place you can be if you’re not at home.” 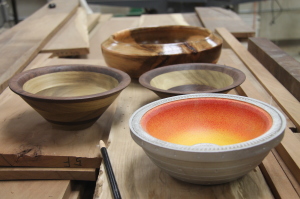 His advice for others who want to live an active and enjoyable retirement? “Pick a time when you can still become a part of the community, make new friends, and enjoy what there is to offer. My wife and I are having a good time,” he said.