Posted on November 7, 2014 in Resident Profile

Lionel Ruberg moved to Pennswood Village 14 years ago because he wanted to live somewhere that would offer quality nursing care when he needed it. 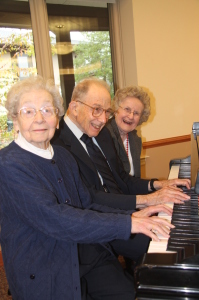 Alice Cohen, Lionel Ruberg, and Peggy Ritter sit at one of Pennswood’s pianos

“I was amazed when I got here. There were wonderful concerts, beautiful walking and biking trails, and, most of all, fabulous people,” he said.

A Philadelphia native, Ruberg found something else he never expected — talented musicians with impressive resumes. The music community at Pennswood Village includes two daughters of the great pianist Rudolf Serkin, music educators Peggy Ritter and Alice Cohen, and bassoonist Benjamin Hoyle, who is the community’s chief executive officer, among others.

“Pennswood is very nurturing of music. I’ve practiced more here than I ever had time for before,” said Ruberg, who plays the piano and flute.

Through what Ruberg called a “great vote of confidence for us,” the Pennswood Village Residents’ Association dedicates a portion of what is received in its annual funds drive to the concerts committee. The committee also receives gifts from residents, their families and their estates.

“People know about us. They know we have two wonderful pianos, and they know we have a wonderful audience that is very respectful,” Ruberg said, saying half of Pennswood Village’s residents typically attend a concert.

The two pianos are Steinway concert grands in Model B that look almost identical, even though they were built 100 years apart. The one built in 1900 was a gift from resident Robert Hilkert, and the newer one was purchased after a special collection of donations (that only took a couple weeks to raise).

Ruberg raved about the pianos, particularly the older one.

“It’s my favorite piano in the whole world. It’s like sinking your hands into velvet, and you wouldn’t believe how it sounds,” he said. 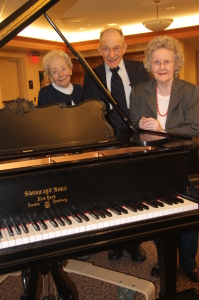 Pennswood Village offers the Penn Hall auditorium, which can hold 225 people, and a new auditorium in the skilled nursing center. Past performances include those from mezzo soprano Tamara Mumford, Philadelphia Orchestra members and graduates from well-respected conservatories. Peter Reichlin services the pianos and brings his jazz ensemble to the community, often on New Year’s Eve.

Ruberg feels booking artists and serving as concerts committee chairman has given him more confidence and people skills.

In 2013, Pennswood Village served as the location for a premiere from composer Philip Maneval with horn player Jennifer Montone and keyboardist Charles Abramovic. Ruberg called it a “coup” to have a high-caliber premiere like that.

“I’ve met so many artists whom I’ve admired for years,” he said.

Ruberg further nurtures his cultural side with Pennswood Village-organized trips to concerts, museums and dance performances.

“It’s a good place for people to live because of the people who live here,” he said. “Coincidentally, the facilities and care are exceptional as well.”