Wedding Wisdom from the Petersons

Posted on November 14, 2014 in Resident Profile 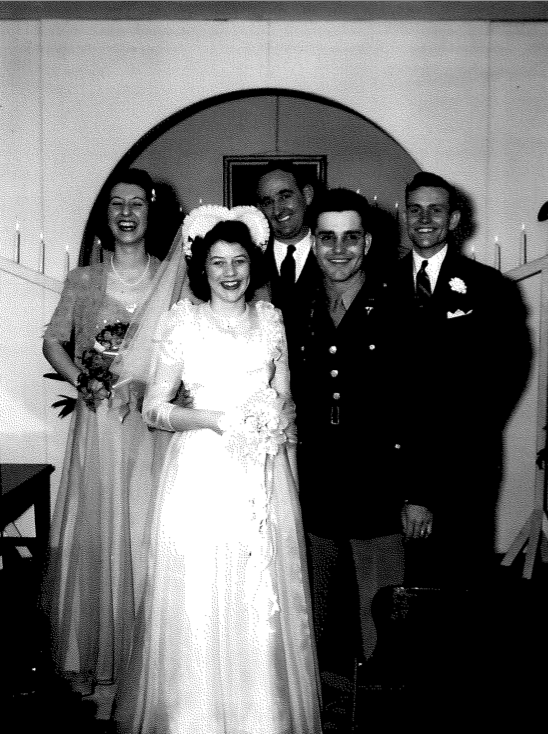 Charley and Ruth Peterson, front, surrounded by friends on their wedding day.

Pacifists Charley and Ruth Peterson married during World War II in sunny California, five months before Charley was sent to the European war theater to serve as a non-combatant Army medical service officer.

To celebrate the actual date of their 70th wedding anniversary, Jan. 18, they invited all of their fellow residents at Pennswood Village to a wine and cheese reception before dinner. The Petersons have lived at this continuing care retirement community for 20 years.

“We simply invited the whole community because who would we have left out, and pretty much everyone came,” Ruth said.

The movie committee at Pennswood Village selected “Friendly Persuasion,” starring Gary Cooper, to show following dinner. Charley said that the group saw a parallel to the Peterson’s lives: the film is about a Quaker couple in Indiana during the Civil War.

Like Cooper’s character, Charley had his faith tested during wartime. His draft board in Ohio already had too many conscientious objectors and would not allow him to register as one. He did not want to be drafted so he enlisted in the Army Enlisted Reserves so he could serve as a medic. He was allowed to finish his senior year at the University of Southern California and take his California State Pharmacy Boards; he passed them and entered the Army in April 1943.

They had met at church, and planned to wait until the war was over to be married. Charley had just been made a 2nd Lieutenant, and had leave time to visit Ruth. The day after he arrived, they decided to get married and quickly put together a wedding on Jan. 18, 1944. They had a one-day honeymoon.

Within five months of marrying, Charley was sent to Europe as part of the 28th Division, 109th Regiment, to serve as a replacement medical assistant. It took him three months to reach his station in France. He saw more than 200 days of combat support, including The Battle of the Bulge. After peace was declared in Europe, his team later greeted trains filled with concentration camp survivors and treated them as they headed to their homes in Spain.

“He doesn’t watch war movies,” Ruth said. He had been overseas for 13 months.

Charley was accepted as a graduate student in the School of Pharmacy at Purdue University. Ruth received her PHT (Putting Hubby Through) by working at Purdue University. After receiving his PhD, he taught at the University of Kansas. They had a family of three boys before they moved to the Philadelphia area to teach at Temple University and later added a daughter. He retired from Temple in 1989.

“I have a great affection for Philadelphia as a city, and Temple as a place to teach,” Charley said.

“We came (to Pennswood) a little earlier in age, but came with the idea that we’ll enjoy life more and have more fun, and I feel like we’ve done that,” Ruth said.

Charley said that he is healthier now than he was when he entered 20 years ago. He used to get his exercise by mowing the lawn; now, he plays water volleyball. He also credits the community’s “superior medical care” with his good health.

“I get to do the fun things, not the grind things,” he said.

Square-dancing was a big part of their lives once their children were out of the nest, and they danced in Moscow, Copenhagen, and the World Fair in Seville, Spain—and even started a dance committee some years ago at Pennswood. They’ve also bicycled in Ireland, France and Germany, and studied Spanish in Costa Rica with a Costa Rican family.

Ruth took up watercolor painting since moving to Pennswood, and has sold several paintings. She also chairs a committee that chooses sponsors for new residents, and packs clothing for the Rescue Mission at Trenton. Charley remains active with the United Nations Association.

Through all of their great experiences, they’ve picked up a few bits of wedded wisdom that they would share with any newlywed today:

Ruth says that it’s important to show common courtesy to each other: “please” and “thank you” are vital.

And the secret to having a great 70th Anniversary party might lie in choosing the right retirement community.

“I’m especially grateful for all of the staff at Pennswood and how they have supported us,” Ruth said. “They made it a wonderful affair.”