Bikes for the World from Pennswood Village 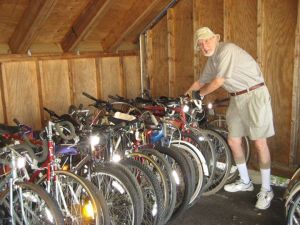 Conversations can change lives. Even ones that start simply: “And how are you doing?” Back in 1994, a similar polite conversation with a patient who mentioned his project of sending used bicycles overseas inspired New Jersey ophthalmologist George Kurz to learn more about collecting surplus bikes to be made available to people who need them.

“In the developing world, somebody might have to walk long distances to get to work and now (with donated bikes) they can get there in a much shorter period of time. And the bikes play an important role in kids getting to school, or people accessing health services,” George explains. The bicycles are sold at a modest cost and used primarily by working poor who don’t have ready access to affordable transportation. The bikes provide an alternative to traveling in open trucks, which can be dangerous and unreliable. Bikes for the World, based in the Washington, DC area, sends shipments of more than 450 bikes at a time to partner groups in the Caribbean, Africa, Central America and the Philippines.

George has been collecting bikes ever since that conversation, and September 20 was the 8th annual collection he has co-chaired here at Pennswood Village, yielding 73 bikes, two sewing machines, and $1,050 in donations to offset a part of shipping costs, plus T-shirt sales. Since its first collection in 2007, Pennswood has collected a grand total of 920 bicycles and 22 sewing machines. And on November 15, 2014, Bikes for the World shipped its 100,000th bike–that’s a lot of lives changed for the better!

Partner organizations in the receiving countries set up a shop to recondition and maintain the bikes, also making affordable replacement parts available. Having recipients invest in the bikes is incentive for them to take good care of them and bring them to these repair shops when needed. This model provides employment overseas and keeps bikes out of U.S. landfills, giving them a second chance for a useful life.

Forty Pennswood volunteers contributed more than 200 hours this year, helping with publicity, picking up bikes, preparing receipts for donors, and “processing” the donated bikes to make them as compact as possible in preparation for shipment overseas. Volunteers have fun and enjoy the meaningful contribution they make. One volunteer commented, “I think the bike collection is the most significant and effective volunteer project that this community sponsors. I am looking forward to next year’s stint.” Anyone can help; they hope to see you next year!

George is no stranger to community service. In high school and college he participated in service work camps, volunteering in Philadelphia, Tennessee and France. As part of his medical career, he made a number of trips to developing countries for teaching and to provide treatment. When he retired, he also became a tutor with Literacy Volunteers of America in Hunterdon County, New Jersey and Grace Place in Naples, Florida. He’s also worked with Habitat for Humanity on projects in New Jersey and Florida. In an excerpt from his memoirs published in Friends Journal, George recounts the impact of those early work camp experiences: “Returning home, I knew I wanted more experiences like this. The workcamp had taken me beyond my comfort zone, and I had felt the value of serving. That weekend and subsequent workcamp experiences set a tone that was to influence the rest of my life—in my career in medicine, which included visits to several African countries to work and teach, and in a variety of volunteer endeavors during retirement, such as Habitat for Humanity and Bikes for the World.”

The Bikes for the World collection is just one example of the ways in which Pennswood Village residents continuously and generously give back to our local community. From prison outreach, to Meals on Wheels, to volunteering at local schools and much more, our residents are making a difference in the lives of neighbors near and far every day.  Whether it’s a one-time volunteer activity or a long-term commitment, our residents proudly give thousands of hours of service to the community every year.