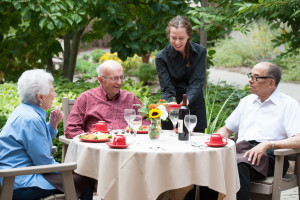 Pennswood Village is home to many diverse and traveled residents, including those who speak various languages, like French, Spanish and German. Those residents, many of whom are native speakers, are able to practice their vocabulary and varied levels of fluency with one another each month at a Foreign Language Table in one of the dining venues at Pennswood Village.

The language tables offer foreign language speaking residents an excellent opportunity to continue using a language that they may not use in a typical day. Topics of conversation include travel, current events, the meal itself and learning about our guests who attend frequently, and much more.

Hans Nord, who was born in Hamburg, Germany is a resident who participates regularly at the German Table. Hans says residents do their best to speak only in German at the table, although someone will occasionally slip back into English accidentally, as it is an easy thing to do. He also makes sure to bring his German dictionary in case there is any uncertainty about a word.

Another Pennswood resident, Diana Davis, who was born in Argentina, joins the Spanish Table at their bi-monthly meetings. She has lived in many different places including Argentina, Uruguay, London and New York City, and has kept many native Spanish-speaking friends along the way. The group has been meeting for about five months now, and consists of six to eight residents, many of whom have lived in South American countries.

“It’s easy to lose it if you don’t use it,” Diana says. That’s why she encourages residents who speak other languages to join in practicing, improving and expanding language knowledge.

Although Pennswood resident George Kurz was not born in a French speaking nation, he studied the language in high school and college, and participated in two summer work camps in France. It wasn’t until George spent time in France that he developed confidence in speaking the language. He now enjoys the challenge of keeping up with the conversation in a language he rarely had occasion to use since the 1950s. George attends the French Table at Pennswood because of his background in the language. The table brings together about six French-speaking residents each month.

Guests are particularly welcome to attend the various language tables and have included Pennswood Village Board Members, residents’ grandchildren who are studying languages in school or planning to study abroad, and regular visits from students from our neighboring George School. French teachers from George School attend the French Table along with several students.

“The students bring a fantastic energy to the group and make for exciting conversation,” says George. Pennswood Village servers have also been known to participate, taking orders from the menu in the designated language and practicing their language skills while on the job.

To learn more about the foreign language tables, or other events and activities at Pennswood Village, give us a call at (866) 740-4977.