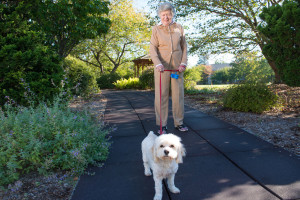 In the March issue of Village Voices, a publication of the Pennswood Village Residents Association, Pennswood resident Leslie Wendel invited fellow residents to participate in a limerick contest. The challenge was to supply a missing fifth line to complete nine different limericks about their fellow Pennswood residents. The response was overwhelming, and with more than 72 responses, it was difficult to determine the winners.

For each limerick, a first and second place winner was selected. There is also an overall contest winner. To win the contest, residents had to come up with the most imaginative, creative, nonsensical, or funny lines. And, it has to rhyme, of course!

The overall winners of the limerick contest are Herb and Charlotte Spencer.

Here are the nine different limericks and the first and second place winners for each. If you’d like to meet the authors or subjects of this imaginative contest call 866-740-4977 for an appointment:

There once was a fellow named Fisk
Whose gait was so sure and so brisk
And, quite often he’d croon
A salubrious tune
…

First place winner: Mary Biggin
Response: To all the young ladies he kissed

Second place winner: Henry Martin
Response: Which I thought was taking a risk

And, as for our friend, dear Anne Baber
Over floral arrangements she’d labor
Oh, the colors won’t clash
If it’s done with panache
…

There once was a lady named Greven
Who thought she had landed in heaven
And, at Pennswood I think
She has just reached the brink
…

A birder, a Cooper named Nan
Once said I am sure that I can
Tell a wren from an eagle
or a lark from a seagull
…

First place winner: Caroline Swain
Response: Or even a boobie that ran

Second place winner: Nan Cooper
Response: Or peacock with tail like a fan

Elin thinks that the Maya were cool
Says their temples were tall, as a rule
And they drank XOCOLATL
From a cup not a bottle
…

Second place winner: Nancy Strong
Response: So careful were they not to drool

Charley P. he doth vegetables grow
& we’re glad & we want him to know
Those veggies are yummy
Swiss Chard for our tummy
…

A lady named Wilma Casella
Had an old, but quite handsome umbrella
And, she said when it rains
I must always take pains
…

First place winner: Herb and Charlotte Spencer
Response: Not to fall down and break my patella

Second place winner: Henry Martin
Response: To cover the pate of my fella

Oh he’s a fine fellow, Mike Posen
And a cute little dog he has chosen
They oft’ walk in the rain
Which he says is a pain
…

Second place winner: Mike Posen
Response: When he has to remove lederhosen

A lady whose last name was Kuh
Once said, it is much more than you
Or now I can support
So if we can just thwart
…

Second place winner: Herb and Charlotte Spencer
Response: An essay by you in haiku