Pennswood Residents Get Competitive on the Bocce Ball Court

If you can roll a ball, you can play bocce! The sport of bocce ball has captivated Pennswood Village, and residents couldn’t be more excited. With another tournament coming up, the sign up list has been exhausted, and residents are getting competitive.

While rolling colored balls across a court may look like child’s play at first glance, the difficulty (and fun!) comes in trying to roll the ball as close as possible to a small target, which is not an easy task, considering forces like gravity, resistance, and calculating the acceleration needed to overcome them. This combination of mental and physical challenge is what has Pennswood residents playing bocce on the campus court, going as far as to organize and hold community-wide tournaments, which always fill quickly.

“The idea of the game is to get your large ball as close as you can to the small ball. The teams work at it back and forth until someone earns the point,” says Jack Bertolino, a resident at Pennswood Village for almost 12 years, who encouraged the installation of the bocce court.

If you’ve never played bocce before, there are two teams (of either one or two players) who take turns rolling their team’s balls across a rectangular court. The first team to roll throws out a smaller ball called the jack, or the pallino, which is the Italian word for “small ball.” This ball becomes the target for the players to roll their larger, colored team ball toward. The team who is able to roll their colored balls the closest to the pallino earns the point. If a team’s ball is touching, or ‘kissing’ the pallino, they can earn two points. A team can earn up to four points during a round. The team who earns the points during a round is the team who throws the pallino and rolls first the next round. 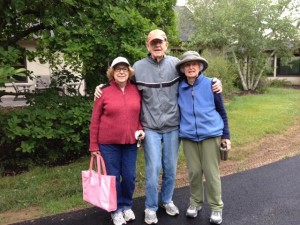 To decide who goes first, teams flip a coin. The winner of the coin toss also gets to choose which color bocce balls they’d like to use during play. Winning the coin toss is considered an advantage because if you can roll the pallino, you’re more likely to recreate the roll with your colored ball, and be the closest player.

“It’s easy to learn but difficult to play. You’re dealing with the aim and range of the ball. You really have to control the ball,” says Manny Tatarsky, a resident at Pennswood for 5 years, and an avid bocce player.

The bocce court at Pennswood Village was built by one of their very own maintenance staff members, and has been operational for about seven years. You can find residents playing games on the court anytime of day, especially in the morning and evenings during hot summer months. Residents can reserve the court on a community calendar if they want to play with friends at a particular time, and keep track of points during game play on the scoreboard.

“I don’t mean to brag, but we have one of the most superior courts around,” says Jack, the pride evident in his voice. At Pennswood Village, the bocce ball court foundation of the court is laid out with seashell pieces instead of sand, so that when it rains, water can drain through more easily. Even after an afternoon rain, residents can still use the court without worrying about puddles and wet sand.

Pennswood Village has had many bocce tournaments in the past, but this year, the tournament will be bigger and better than ever. The tournament this year will consist of two leagues: the American League and the National League. Each league has 8 teams, so instead of leaving the tournament after one loss, teams will be able to play 7 other teams before deciding the winner of each league. When a team from each league is declared as the winner, they will face off in the championship.

The 16 team spots filled up in just two days, meaning 32 residents will have the opportunity to face off in Pennswood’s most exciting bocce tournament yet. Manny and Jack encourage other residents to play because there aren’t many rules to learn, and it’s more of a social event rather than an athletic one.

“Unlike croquet, where people only do a little clap, there’s yelling in bocce!” says Jack.

Many residents who play bocce at Pennswood haven’t played the sport before moving to the community, but find themselves looking forward to bocce because it’s a great way to get involved and get competitive with new friends.

If you want to learn more about the bocce tournaments at Pennswood Village, or any of the other events, activities, and trips, give us a call today at 866-740-4977.