Putting Green is the Latest Addition to the Pennswood Sports Center 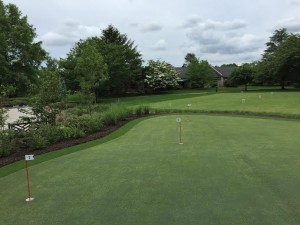 “It’s very similar to miniature golf. You simply play with a putter,” says Jack Williams, Pennswood resident and member of the Sports Center Committee, “but the obstacles are the slope and the “quickness” of the green that controls the rolling speed of the ball.” 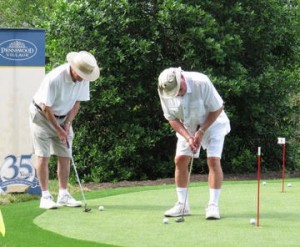 At Pennswood Village, there are several resident committees that promote physical activity around campus. The Sports Center Committee is charged with promoting outdoor sports activities on campus in general, while the Bocce Ball Committee, the Croquet Committee, and the Putting Green Committee are responsible for arranging lessons, managing tournaments and encouraging play of each specific sport at the Sports Center. Therefore, tournaments on the new green will be scheduled and promoted by the Putting Green Committee.

The addition of the putting green has been several years in the making, but after residents began the Bocce and Putting Green Committee and later passed around a petition to have a putting green installed, Ben Hoyle heard the residents loud and clear.

Now residents can happily play the green on their own, with a team, or in a tournament, without ever having to leave campus.

The new putting green adds another colorful element to the Pennswood Village campus. The artificial turf is like a carpet, made from polypropylene, and protruding “grass” blades. To finish the artificial surface, sand was swept over the surface to fill in the space between the grass blades. Finally, the surface was rolled with a power roller to achieve the desired rolling speed for a well-putted ball. The green surface is very similar in look and behavior to natural grass. It is more comparable to natural grass than a nylon turf that you might find on a miniature golf course, which is harder and bouncier.

Yet Another Wellness Opportunity 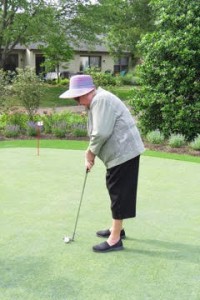 The putting green offers yet another wellness opportunity to residents on the Pennswood campus. In addition to amenities like our walking trails throughout scenic woods and meadows, the bocce and croquet courts, the fitness center with personalized fitness programs, and the 60-foot lap pool, the putting green is one more option to practice active living.

Whether you prefer to swim, walk, bike, run, or play, there are amenities to do it at Pennswood Village. Don’t see your favorite activity on the list? The putting green is just one example of how residents bring their favorite activities to campus. The residents at Pennswood direct their own events and activities, so if you wish to see another event or activity, you can always take action to start something new.

Don’t know how to play? For residents who would like to learn how to putt or play bocce or croquet, contact one of our committee members for a free lesson. For more information, call Pennswood Village at 866-740-4977.