Making the Move to Pennswood: one resident’s experience 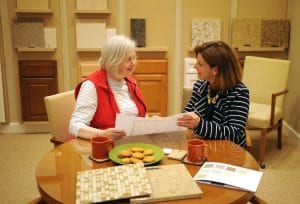 “Whatever you want, that’s what it will be,” says Donna Bauman, Pennswood Village resident, about life at this Newtown, PA Continuing Care Retirement Community.

Donna moved from a three-bedroom house in Arizona to Bucks County, Pennsylvania in early 2017 to be closer to her children and their families. Initially, she and her children considered sharing a home, but Donna insisted that she find her own apartment home at a nearby retirement community instead.

Her son found three different communities to visit, each located within an hour of where he and Donna’s other children live in New Jersey. But, for Donna, the decision to move to Pennswood Village was an easy one. “By far, Pennswood was the most spectacular place I could ever want to be.”

Donna immediately knew that she wanted to make Pennswood Village her home after staying two nights in a guest suite through the “Be Our Guest” program. The program allows prospective residents to get the full experience of life at Pennswood Village by staying in a guest apartment, spending time with other residents, and enjoying all the services and amenities the community has to offer.

“I knew I was home as soon as I walked into that apartment. In fact, the guest suite I stayed in is my home now!” says Donna.

The deciding factor for Donna was the friendliness of the other residents she met during her visit. Their warm, welcoming attitudes helped Donna to feel at ease. “By far, the residents here are the most friendly, upbeat people I’ve ever met. In fact, several residents that I met during my Be Our Guest stay have become close friends since my move. It was so nice to have connections even before I moved in.”

To make the move from Arizona to her new one-bedroom apartment in Pennsylvania, Donna hired the help of a local senior move manager to ensure a smooth process. The manager was able to help Donna pare down her furniture and belongings, and to make sure it would all fit perfectly in her new home.

They were able to plan out her apartment ahead of time using the apartment layout, and so when the movers brought in her furniture, Donna knew exactly where to put each piece.

“My new apartment is just perfect. Everything that I wanted, I could bring with me,” says Donna.

Some of her favorite parts about it are the lovely views just outside her windows, no matter the season. When she looks out her back windows, she can see beautiful crabapple trees that bloom every spring, and a large Norway pine that is home to a few of the campus’ squirrels. When she walks out her front door, she is greeted by a pleasant courtyard that is maintained by Pennswood’s landscaping team. “No matter which way I go, I have something beautiful to look at!”

But, her new neighbors are really the icing on the cake: “It’s like family here, it’s amazing. I now have 400 new brothers and sisters!”

When Donna moved in, she was assigned a resident sponsor to help her with anything she may have needed. But, the sponsor wasn’t the only one who welcomed her into the community. Her new neighbors, residents she had met on the “Be Our Guest” stay, and even residents she had never met, made a special point to help her feel at home.

“Someone I had never met called and asked if I wanted to have dinner with her, and that blew my mind. It was so unexpected and so welcoming.”

“The staff at Pennswood has also played a big part in making me feel at home,” says Donna. “Whatever you need — from changing a light bulb, to calling the front desk with a question, to making a medical appointment – staff is delighted to help. Their customer service makes me feel like I’m living in a resort!”

Now Donna is enjoying an active lifestyle as a resident of Pennswood. She frequently takes advantage of the campus amenities, and enjoys spending time with other residents.

She spends about two hours a day in the pool, six days a week, participating in group exercise classes and swimming laps on her own. She also spends time exercising with trainers in the gym, volunteering at the library, singing with the Pennswood chorus, attending the ballet in Philadelphia, and so much more.

“If anyone is ever bored here, it’s their own fault!” jokes Donna.

She also advises that new residents put themselves out into the community by joining new groups and getting active in the community, to help make the most of their retirement.

“It’s the best move I’ve ever made in my whole life,” she says “This is the way to spend your later years, being surrounded by people who really care about you and want to get to know you. You can be as active as you want.”