How a Quintessential New Yorker Came to Call Pennswood “Home” 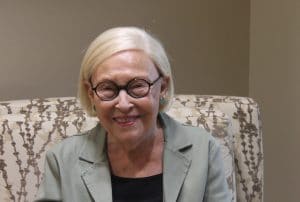 “My move to Pennswood Village from New York City was a progression,” Claire Speciner says. A resident of our beautiful community for more than four months, Claire recalls, “Moving to Pennsylvania was not something I thought I’d ever consider. And now I love it here, especially the people! It’s very different but I don’t miss the city at all.”

Still a practicing psychotherapist, Claire maintains her practice in New York City and visits every few weeks. She also meets her clients via phone from her new home at Pennswood Village.

“I had lived in my rent-controlled apartment in Chelsea in New York for 35 years,” she says. “It was near the High Line and I never thought I’d leave.”

“About five years ago a friend I was visiting in Chicago asked if I’d like to see where she was moving. She showed me the Quaker CCRC where she had moved.”  At the time, Claire didn’t think that lifestyle was right for her.

In the next few years, “My friend badgered me and said that the CCRC that she had chosen has several other locations. I began to think maybe this should be my next step.” Claire visited several communities. She even made a deposit at one and then changed her mind.

“Three years ago, another friend introduced me to someone who suggested that I go see Pennswood Village, the stand-alone Quaker community in Pennsylvania where she had chosen to move.”

And so it was through friends that New York City-based Claire became interested in the community she now calls home.

“I took the train from New York City to Pennswood Village four times and took my daughter. Walking in the front door there was something about the people. People walking and talking…friendly, smiling, relaxed people with purpose. There was a gift shop and an art gallery. We stayed overnight a few times. The landscaping, the gardens, and the environment are very beautiful here.”

“A few months later, I told Jennifer Doone, the Pennswood Marketing Director that I wanted a studio. When she called with one available, I drove down with my daughter. The moment we entered we both said, ‘This is it.’ I moved a few months later.”

Claire’s smile is contagious as she tells of how she discovered that Pennswood Village is right where she wants to be—even after 35 years of living in New York City and in Great Neck, NY before that.

“What do I love about Pennswood? The people are so kind, generous, friendly…very intelligent. I love the quiet. My apartment has a wonderful view. From my patio, I look out at a courtyard with trees, benches and a gazebo.”

As for becoming involved in the many activities at Pennswood, Claire says, “So far I am doing two things. One is a discussion group of the science times section of Tuesday’s New York Times. We gather every Thursday morning. On Friday, I sing show tunes with the Pennswood Singers.”

What is she looking forward to? “My next project is to start a physical therapy routine to work on my posture. It’s a beautiful place to do that. I also plan to spend time in the heated pool.” Claire is also looking forward to identifying volunteer opportunities to give back.

Claire laughs when she recalls breaking the news of her move to friends in New York. “I’ve belonged to a women’s group for 19 years. When I told them what I was doing, they were aghast! To them I was the quintessential New Yorker!”

As Claire says of her new home at Pennswood Village, “It’s a unique environment for people who love community. You can enjoy solitude when you wish and then go out and belong.”

Stay tuned for more stories of residents who left the Big Apple for beautiful Pennswood Village!