The lively community atmosphere at Pennswood Village has fostered wonderful relationships among residents that make neighbors feel like “family.” In some cases, it’s more than a figure of speech.

Daisy Grubbs has lived at Pennswood for a decade and a half. Her brother, Art Crooke, moved into the community five years ago. They were familiar with the area because their brother, Leonard Crooke’s, dairy farm was about nine miles away.

“There’s nothing to not like about it,” Daisy says of Pennswood. “I enjoy not having to do any cooking or housekeeping.” 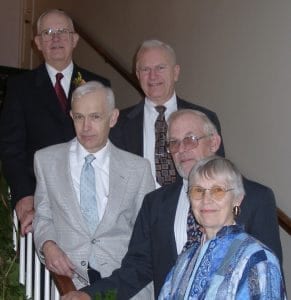 Art and Daisy, of the Crooke family (above), enjoy creative opportunities at Pennswood Village such as the Passmore Gallery and community theater. Their brother, Leonard, has a dairy farm about nine miles from campus.

Daisy spends much of her time creating art and working on the committee that oversees the Passmore Gallery, one of the community’s three art galleries. The gallery has hosted a range of art genres, including woodwork, quilts and art produced by residents’ grandchildren.

“It’s a very community-oriented living arrangement,” she says. “The nice thing is I require a lot of solitude, but when I want company and walk out the apartment door, there are people!”

One of them is her brother, Art. Professionally, Art has worked on computer-related engineering projects for many years. As a hobby, though, he’s always gravitated to community theater, helping productions with lighting and set construction. He just recently created a teleprompter for Vocal Chords, a musical produced and performed by Pennswood residents.

“[Daisy] was pretty enthusiastic about Pennswood,” Art points out as he explains his decision to leave Massachusetts and join his sister at the community.

Second generation of Swains at Pennswood

Caroline and David Swain (above), whose late father, Henry Swain (shown in picture frame) was the first resident to move into Pennswood Village in 1980.

The resident-driven, caring atmosphere has been present at the community since the beginning, says David Swain, who lives with his wife, Caroline, at Pennswood. His late father, Henry, became the community’s first resident when he moved in on June 10, 1980.

“He was very much a community person, but not a committee person, hating meetings and all that stuff,” David says. Despite this, Henry ended up initiating many of Pennswood’s resident groups and activities.

David and his wife were drawn to Pennswood not only by his father’s experience, but also by the community’s excellent healthcare and its outstanding resident life. They were one of the first second-generation Pennswood residents.

“We came from Florida,” he says. “We’re just about unique in having done that.”

David has worked as a community planner and a community organizer. A self-described “workaholic,” he serves on a number of resident committees, including some that oversee the community’s governance. Caroline heads up the community library and helped design its remodeling.

Avid travelers, David and Caroline have started a committee that helps residents share their traveling experiences with each other. David helps residents organize and digitize their photos and provides feedback on their presentations as they prepare them. The presentations are extraordinarily popular and regularly attract 75 to 150 resident attendees from a community of about 400.

At Pennswood, the feeling of “family” goes beyond relatives. The welcoming, inclusive atmosphere is an important reason why Pennswood continues to thrive. For more information about community life at Pennswood Village, simply reach out or call us at 215-504-1118.