Gardening at Pennswood, Part 2: Sowing seeds beyond the campus

As part of the beautiful, enriching campus, gardening at Pennswood isn’t confined to the community’s one-acre plot, or even to generational or national borders. Residents grow plants in other parts of the community, while also growing connections with those beyond Pennswood Village from near and far.

Many residents at Pennswood Village enjoy growing flowers and other plants around their residences’ patios and balconies. Resident Jenny Hollingshead does both, tending to the flowers outside of her and her neighbors’ apartments, as well as working in the meadow garden.

Jenny has grown several kinds of squash in the community garden. This year she’s focusing on tomatoes, as requested by the community kitchen. She started some plants in her apartment to give them a head start, and then transferred them to the meadow garden.

“Right now when I looked today there are some starting to ripen,” she says (with just a hint of an English accent evincing her country of origin). “I put three kinds in: Early Girls, then Roma, then Rutgers in a little later so hopefully we’ll have a rolling season of ripened tomatoes.”

Children from the nearby Newtown Friends School also get into the act, Jenny says, when they visit several times a year to help control some adorable-but-pesky rabbit interlopers. 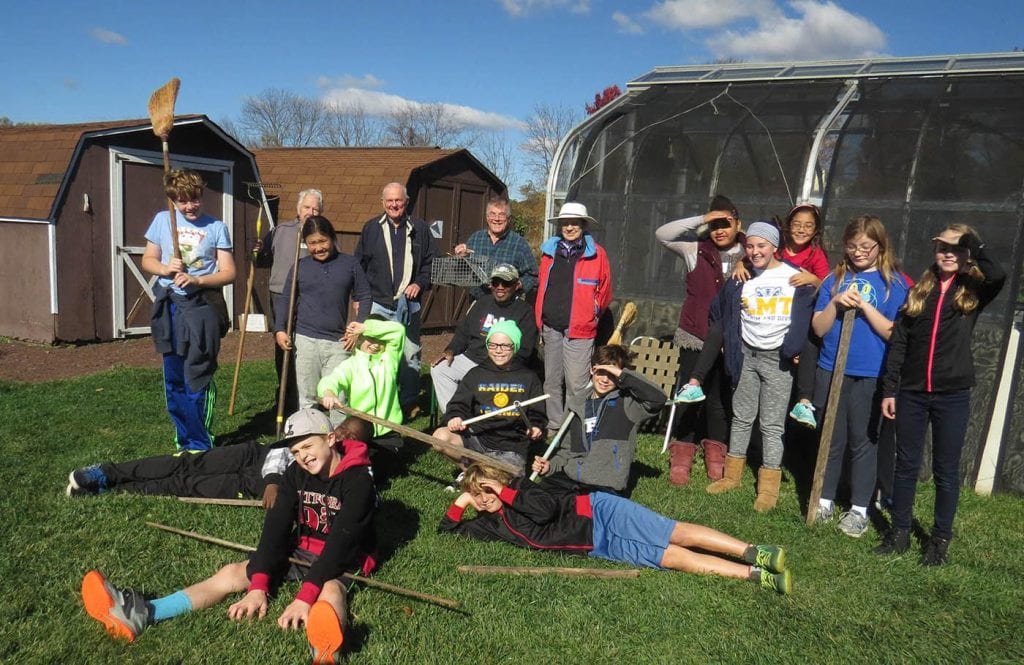 “For all we try to keep them out, those little baby rabbits get in!” she says. “They have a gay old time eating this and that. So we like to try to get them out. The kids absolutely love trying to round them up and get them through the gate.”

Returning to his roots, while helping refugees lay their own 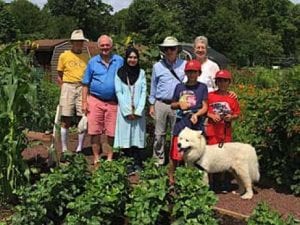 Resident Jack Williams is another resident who uses Pennswood Village’s garden to inspire growth with others. Although he spent his career as a patent lawyer, he grew up in Illinois farm country and even worked in the fields as a youngster during World War II.

“This gives me a chance to get back to my old roots,” he says, noting that he’s grown tomatoes, basil, corn and several different types of squash in the meadow garden.

“I’m also participating in supporting some refugees,” he adds. “There’s a woman and her two children who fled from Syria. They’re here [in the area] under the care of a number of different churches — mainly Quaker but also some others. I’ve been able to find a number of Mediterranean seeds from an Italian seed company and planted something that’s familiar to them. I’m just the grower; there are others here who manage getting the vegetables to them at harvest time.”

The meadow garden at Pennswood nourishes the bodies and souls of many in the community — even those who just come to sit in the gazebo and enjoy its tranquility.

“It’s a wonderful place, so quiet,” Jenny says. “The community garden is a great place to be.”

If gardening at Pennswood Village is something you think you’d enjoy as part of an inspired senior lifestyle, we invite you for a tour of our campus! See the garden, meet current residents and get answers to all the questions you may have about active senior living in a Continuing Care Retirement Community. Schedule your tour today!