Posted on November 21, 2018 in Resident Profile

“A friend suggested that I take a look at Pennswood because she had heard such good things,” said Diana. “I chose Pennswood because I never had to see another place,” Diana described. “Pennswood was the first community on my list and I liked it so much that I knew it would be the best for me. There’s a different feel to Pennswood. Things like the fresh flowers make a big difference, and the friendly people. People look happy here.” 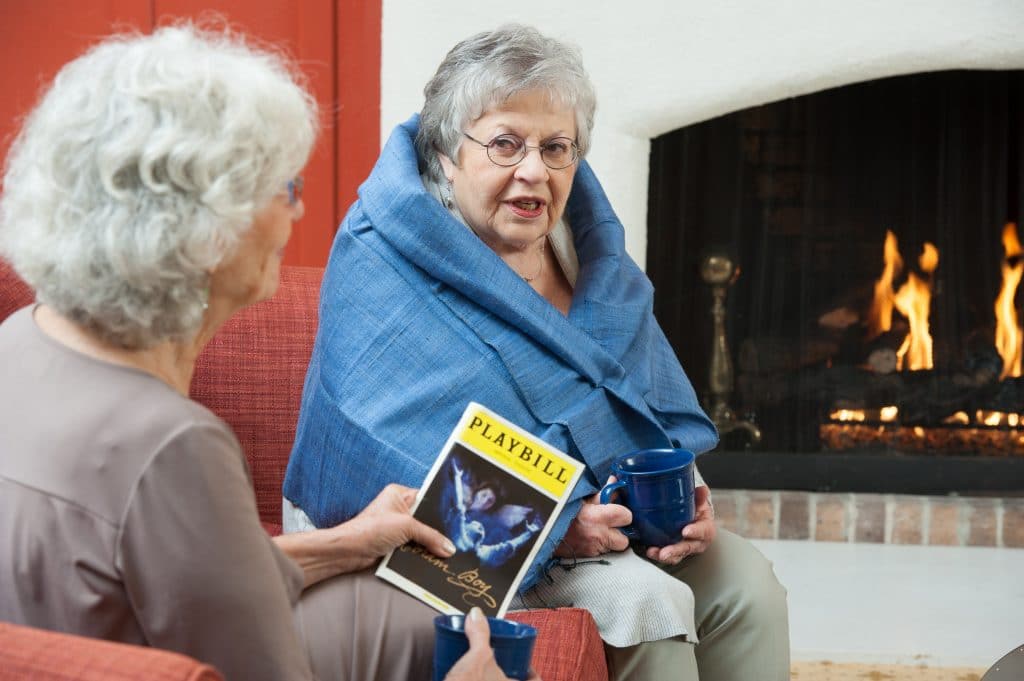 Diana Davis, pictured in blue, moved to Pennswood in 2011

An appreciation for the arts

Diana’s previous apartment on Manhattan’s Upper East Side was just several blocks from The Met, and she has always had an appreciation for fine arts. “I was a member of The Met for years and now I’m a member of the Philadelphia Museum of Art. I like impressionist art, among other styles, and we have so much to choose from nearby,” Diana said.

Fortunately for Diana, there’s no shortage of artistic outlets at Pennswood. Diana mentioned that she enjoys the music, visual art and theater activities offered at the community because they’re top-notch.

“The concerts here at Pennswood are equal to the best anywhere, even New York and London,” Diana said. “The resident in charge of arranging the musicians, Lionel, is a very selective chooser and he is an expert. I also arrange outings with friends here to see art and ballet in and around Philadelphia.”

For the visual arts, Diana made sure to mention how fellow resident Bernice King heads up the Pennswood Gallery and curates top-flight exhibitions. Diana said that the quality of the arts programs at Pennswood is a result of having so many knowledgeable residents in so many fields, which benefits everyone and keeps everyone engaged.

“One of the residents gives a course on Shakespeare. This environment is a tremendous learning situation,” Diana said. “That could be intimidating to some, but everyone contributes and this community is exceedingly welcoming.”

Coming from the big city, one of the biggest differences Diana noticed at Pennswood is that everyone acknowledges each other in the community’s corridors, which made her feel welcome from the start. She said, “If someone thinks you’re new, they will stop and introduce themselves. Neighbors here go out of their way to get to know each other and stay social.”

Diana, a native Argentine and Spanish speaker, also created her own way to stay social, with a twist. She started the “Spanish Table” in the Pennswood dining room, which meets during lunch or dinner on the second and fourth Tuesday of each month. She explained that the Spanish Table is open to anyone with any level of Spanish language knowledge, and it’s meant to be a casual setting to converse with others “en español.” Diana says that she likes the Spanish Table because it helps her reconnect with and maintain her native language.

So much to do

Fortunately, living at Pennswood gives Diana the time she wants to explore her hobbies and interests, because she does not need to worry about home upkeep or maintenance. “Everything is thought of, everything is taken care of,” she said. “If you call, the maintenance crew is there in a matter of minutes.”

Diana said that with her time free to spend as she chooses, she belongs to one reading group at Pennswood and plans to join another. The problem? She may not have time to read all those books!

“We’re very good at staying busy here, there’s just so much to do!” Diana said. “I might not be able to read all those new books, because these are so many events here that I like – it’s hard to select!”

Finally, Diana says that, even coming from a city like New York, it was fairly easy for her to adjust to life at Pennswood and that she’s very comfortable and independent. For anyone considering the move from the Big Apple to Bucks County, Diana said, “The community has a different feel to it, and it’s lovely. You’ll find a lot of friends here!”

We invite you to experience our welcoming community, just like Diana has. Stopping by for a visit is a great way to see our campus, meet residents and get a sense of our vibrant lifestyle. Simply click here to get in touch, or call us at 215-504-1118!