Drums Alive, a unique music-based exercise program, has come to Pennswood Village! The program has gained popularity around the world because it’s not only fun and energetic, but also has a long list of potential health benefits for both the body and mind. During the program, each participant has a stability ball, a riser to hold the ball and a set of drumsticks. The instructor teaches a few moves, then the music starts playing. For the next 45 minutes, participants drum along together, dancing and enjoying the collective sounds!

END_OF_DOCUMENT_TOKEN_TO_BE_REPLACED

Your first day at a retirement community is exciting, nerve-wracking and full of new things. Maybe you’re not sure where to grab a bite to eat, how to get to the pool, or how to get involved in an activity. There are so many new places to see and people to meet, and you may not be sure of just where to start.

That’s where the Pennswood Village Newcomers Club comes in—a club dedicated to helping new Pennswood residents become acclimated with the many opportunities available. The Club, which first started in November of 2016, helps new residents get oriented to the Pennswood community. The Club meets on the first and third Tuesday of every month, with a mix of new, newer, and “veteran” residents attending.

END_OF_DOCUMENT_TOKEN_TO_BE_REPLACED

Winter didn’t stop Pennswood residents from celebrating the color and life found in its gardens. Last month, the art show, “Inspired by the Garden,” opened in the Passmore Gallery, featuring beautiful art centered around a garden theme.

END_OF_DOCUMENT_TOKEN_TO_BE_REPLACED

The residents at Pennswood Village recently held a film festival that spanned several nights to celebrate the life and work of Dr. Martin Luther King, Jr. Timed to be viewed around his birthday, the film festival showcased three films that explored King’s life or other themes in the fight for racial equality. The films acted as a catalyst, sparking conversations among residents about race issues and potential ways to become allies in the struggle to live up to our nation’s ideals of justice for all.

Pennswood Village residents are proud advocates of racial equality, with several different committees dedicated to peace, equality, and social justice. The event was organized by residents on the Peace and Social Justice Committee and the Quakerism Committee, two groups that work for peace and equality in all capacities.

END_OF_DOCUMENT_TOKEN_TO_BE_REPLACED

When David Swain and his wife, Caroline, moved to Pennswood Village about 10 years ago, they were excited to begin their active community lifestyle. They explored many of the resident organizations and events, but found none that revolved around one of their favorite passions: traveling. That’s when the two decided to start a group, now known as the Sharing Travel Adventures group, where residents can share their travel adventures with one another.

END_OF_DOCUMENT_TOKEN_TO_BE_REPLACED

“This welfare simulation dramatically demonstrates how much time and energy many families have to give just to survive from day to day. It quickly dispels the myth that ‘people would do fine if they would only go out and get a job!’”  – past participant in a previous simulation – Pennswood Village Press Release

The social justice committee at Pennswood Village partnered with the Bucks County Opportunity Council to host a poverty simulation. The social justice committee, a wholly resident-run committee, is active within Pennswood and also in greater Bucks County. The simulation was designed to give people a better understanding of the challenges of living in poverty. END_OF_DOCUMENT_TOKEN_TO_BE_REPLACED

A New Addition to Wellness at Pennswood Village: A Recumbent Tricycle

Despite having a low profile, Pennswood’s latest ‘resident’ has been getting around quite a bit since arriving recently, and has even attracted a small but growing fan club.

That ‘resident’ is a three-wheeled recumbent tricycle.

END_OF_DOCUMENT_TOKEN_TO_BE_REPLACED

“A friend suggested that I take a look at Pennswood because she had heard such good things,” said Diana. “I chose Pennswood because I never had to see another place,” Diana described. “Pennswood was the first community on my list and I liked it so much that I knew it would be the best for me. There’s a different feel to Pennswood. Things like the fresh flowers make a big difference, and the friendly people. People look happy here.” END_OF_DOCUMENT_TOKEN_TO_BE_REPLACED

The strong community bonds that Pennswood visitors sense is often fostered by the family ties of its residents.

Lynne Waymon and her sister, Anne Baber, have enjoyed living at Pennswood for years. Anne moved to the community in 2012, while Lynne and her husband, Todd, joined the community a few years later. 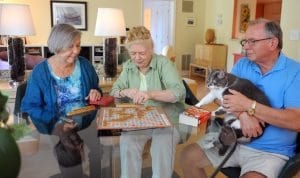 Anne Baber (left) and Lynne Waymon (center, who is Anne’s sister, pictured with her husband, Todd, far right, with cat, Chester) are an example of the many family connections at Pennswood.

“Actually, my sister was the one who found Pennswood,” Anne explains. “She knew I wanted to be closer to my daughter [Amy], who lives about 15 minutes away from here in New Jersey.”

Lynne saw an ad for Pennswood in The New Yorker and called Anne, who was living in Kansas City at the time.