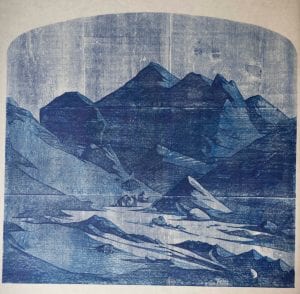 On Sunday, January 27, 2019, an exhibit of Matthew Colaizzo’s wood block prints will open at the Pennswood Art Gallery, 1382 Newtown-Langhorne Road, Newtown, PA with a wine and cheese reception from 3:00 to 4:30 p.m., preceded by an illustrated presentation by the artist  from 2:00 to 3:00 p.m. in Penn Hall. Both events are free and open to the public.

Colaizzo works in the ancient medium of wood block printing interpreting present day bits and pieces of our everyday urban and wild landscapes in a spare and stark manner reminiscent of the great Japanese print maker, Hokusai. By so doing he lets us see the universality of a rubble heap, a building site of an on-ramp to I95, or a steep walled quarry, or a vast modern building excavation, or perhaps a scene that could be a picture from a current Mars roving space craft.

By incorporating elements such as the edges and knots in the pine wood planks he uses (purchased from his local Home Depot) he encourages our imagination to expand one of his landscape’s sky to incorporate cosmic elements – the old with the new – or in other instances micro to macro or vice versa. As Colaizzo says his “images… investigate our human mark on the planet.” He states further that he blurs the line between the natural and unnatural, and that he hopes to encourage the viewer to examine our place on earth.

Colaizzo, a member of the Tyler School of Arts faculty and a graduate of the Pennsylvania Academy of Fine Art, has an extensive exhibiting background reaching from Rome, Italy, to New York, New York. His work has been reviewed in such prestigious publications as The Washington Post, Philadelphia Inquirer and Title Magazine.

The Pennswood Art Gallery, which has been exhibiting artists for 34 years including such famous names as Harry Leith Ross, Daniel Garber, and more recently Jon Redmond, Earl B. Lewis, Bruce Garrity, William B. Hogan and Peter B. Treiber is a non-profit, contemporary fine art gallery located in Pennswood Village on Rt. 413 south of the Newtown by-pass, adjacent to George School. For information call 215-968-9110.